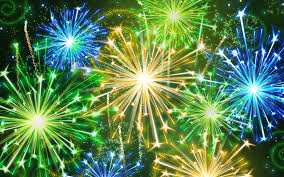 Green. Red. Pop. The echoes hiss down upon us distantly like a noise underwater, or from far away. I sit in a crowd of hundreds of people, children and adults, squealing, pointing, shouting at the sky. Green, blue, white, pop, pop, pop.

The height they will reach is equal to the initial velocity times time minus one half time squared multiplied by Newton’s gravitational constant.

Approximating the radius of the explosion of white, there, and estimating the angle of projectile launch at seventy-five degrees, initial velocity of that shell must have been nearly four hundred and eighty one feet per second, shell size probably eight inches.…

I stop myself. This is why you lost her, I reprimand.

I try to see the fireworks not in terms of trajectory and force but color and light, not oscillations and mechanics but simple pleasure. I watch as they sparkle through the sky, but all I seen in them is her eyes, glimmering at me when she smiled. I listen as they pop and crackle, little bursts of excitement, but all I hear is her tinkling laugh.

“You don’t get me!” she shouted, five days ago. “Every time I say something, anything, you have to analyze it, break it into pieces, tell me why and how I’m behaving this way and you can’t just accept that I’m a human being and not a physics equation!”

Last year, this time, this same spot, I held her hand as we lay under the Arch and watched the fireworks. I was too shy, then, as we got to know each other in the haze of summer, to tell her why I loved them–how predictable and understandable they are, how simple. They demonstrate the laws of physics with all the style and aplomb of a trapeze artist. I watch as another set of starry lights dissipate into smoke and I can’t help myself. I think of the Ideal Gas Law, and how it demands that the resultant particles of water vapor, carbon dioxide, and nitrous oxide push apart from each other in the vast open atmosphere. How those particles will be rearranged in another form in accordance with the Law of Conservation of Matter. How I may eat them  in an apple, or drink them in rain. Physics is beautiful to me.

But so was she.

3 replies to Law of Conservation – A Short Work Of Fiction