A dystopian future where genetically-modified food is ever-present. Where the rising tides of climate change have permanently altered human landscapes and agriculture. Where corporations and governments use biological warfare to enslave and oppress. Where political webs are woven and unwoven every day, with millions of lives hanging in the balance.

Am I describing the Seeds trilogy by K. Makansi, or THE WINDUP GIRL by Paolo Baciagalupi?

The answer is both. Everything I said wrote above could equally describe the world of Okaria where my trilogy takes place, or it could describe Baciagalupi’s ravishingly bleak vision of a future Thailand, where sky-high dikes and levees combined with massive pumps working twenty-four hours a day are all that hold the oceans at bay. 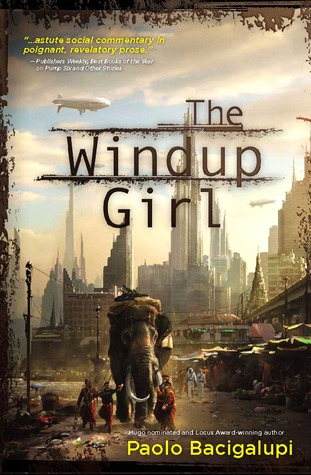 Our books are different in as many ways as they are similar. But still, it’s not hard to see why someone might ask if K. Makansi had read THE WINDUP GIRL before writing the Seeds trilogy or vice versa; if one of us had inspired the other. The prevalence and destruction of genetically modified foods is a cautionary tale in both books, although for wildly different reasons. The clarion call of global warming, and the impending agricultural devastation that will result, is loud and clear. As I read through this book, it was nearly impossible not to draw comparisons.

But the differences are notable. Not only in the setting and approach – Baciagalupi’s novel is set in a futuristic Bangkok in a world where genetic diseases run rampant and the threat of starvation is forever just around the corner – but also in the writing. Baciagalupi’s novel is not YA. With complex political forces at play, a mature cast of characters I occasionally had trouble keeping up with, and plenty of gruesome, unhappy sex scenes, this book is not for children. The other novel of his I’ve read, SHIPBREAKER, is decidedly more optimistic; in THE WINDUP GIRL, both his writing style and his vision of the future are dark and violent. Only one character in the book is even remotely positive, a gentle father/honorable warrior archetype, and he (spoiler alert!) gets killed half-way through the book. His ghost remains to the end, smiling grimly and hopeful to the last.

THE WINDUP GIRL also takes a different approach to the debate over genetic modification. In this vision, corporations of the future have patented genetically modified strains of foods to the point where you cannot buy foods – from anyone – without a corporate name attached. In the decades prior to the book’s opening, the “calorie companies” released strains of crop diseases into the wild, diseases that quickly mutated to make humans sick as well. Hundreds of thousands, if not millions of people have fallen victim to these diseases, plagues unleashed intentionally by the calorie companies of Iowa and the American Midwest in order to ensure their dominance over the food crops of the world.

Yet another devastating instance of Western colonizing and hubris, I suppose.

It’s a challenge to summarize, because there’s an ensemble cast of characters with disparate lives, some of whom never meet, and yet they all play a critical role in Baciagalupi’s web. The protagonist, Anderson Lake is the only Westerner in the book and also the least likable of the cast – perhaps intentionally so. Emiko, the windup girl herself, belongs to a race of artificial, genetically-modified humans, or “New People”. She was fascinating, playing the role of both victim and savior, a creature bred into submission who cannot help but question and ultimately rebel against everything around her. But even that didn’t make her likable. Her self-pity and morbid outlook were understandable but hard to stomach. Kanya, Jaidee, and Hock Seng, all survivors of horrific violence, all fighters in their own way, and all despicable in their own way, were the most empathetic characters in the book.

If anything, my biggest problem was that too much has happened in the past, described retroactively through the traumatized eyes of the characters of the present. For the sake of comprehension, I wanted a prequel, one that would describe the events that birthed this new world. The history of this invented world, from GM virus outbreaks to apocalyptic climate events to global violence and warfare, deserved an entire book of its own. For my part, the world was too complex and the characters’ backstories too intricate to fully understand everything motivating their actions in the present day.

That small critique aside, the book was arresting. It was like watching a multi-car interstate collision, unable to look away as dynamic political forces collided with seemingly insignificant actors, and the beating of the butterfly’s wings stirred up a hurricane. Not least because the book feels so prophetic. So possible. The second half left me panting as I tore through the pages, frenetically trying to find out where the world was headed, what the fates of the characters would be.

And yet, despite a growing pile of bodies, too many coups and betrayals to count, and the death of an ancient city, the ending is surprisingly placid. Calming, even. The fate of Baciagalupi’s world reminds us that the future is now, and all the pumps and levees of human ingenuity cannot save us if we want to destroy ourselves. The ocean does not care, and we cannot hold it back.

Although I found it a challenge to read at times – pessimism is tough to swallow – THE WINDUP GIRL sucked me in. The world-building was genius and the characters brilliantly drawn. I would ardently recommend this book to anyone interested in near-future sci-fi, dystopia, genetic modification, or political intrigue.

For clarification, I hadn’t read THE WINDUP GIRL until about three months ago, over a year since the publication of the third book in the Seeds trilogy. And since Baciagalupi’s novel was published in 2009, three years before the first chapter of The Sowing was first drafted, neither of us is likely to have imitated the other. But the similarities between our stories do indicate a cultural zeitgeist that is fascinated with the possibilities of a chaotic future, genetically modified food, and climate-related devastation.

Questions? Additional thoughts? Strong opinions, kindly worded? I’d love to hear from you! Leave me a line in the comments and I’ll get back to you.