On Friday, the Republican-controlled Senate passed their tax overhaul plan, which, when reconciled with the House bill, will most likely shrivel the U.S. economy like that bag of wilting spinach in the back of your refrigerator. Even though nonpartisan organizations across the country have agreed that this will take away health insurance for up to 13 million people, raise taxes on low-income and middle class families, murder graduate education programs with a blunt shovel, and generally sink the U.S. economy faster than you can say Titanic, Republicans are still probably going to pass this bill. That’s why you should consider decomposing into compost right alongside the rest of the economy!

The Republican tax plan is going to destroy your health insurance, make it harder to buy a house, and tax millionaire CEOs at the same rate we tax cow dung – which is why there’s never been a better time to take matters into our own hands by decomposing beneath a well-balanced combination of rotting vegetables, green matter, and animal manure. I don’t need to tell you how much more rewarding decomposing into humus and bioavailable nutrients will be than working for minimum wage without health care or benefits while being taxed at a higher rate than multi-billion dollar corporations. Instead of slaving away in an increasingly stratified economy where it’s harder and harder to literally just stay alive, you’ll be able to grow all kinds of plants – maybe even a tree! – from the nutrient-dense compost generated by your decomposing body.

I know becoming nitrogen-rich fertilizer doesn’t sound glamorous, but you have to agree it’s better than living to see the day when your rich, white ex-boyfriend from college who now works in I-banking paves his swimming pool with gold. This way, you can do something morally sustaining by decomposing into valuable nutrients that trees can use to build their mycorrhizal networks. And guess what? You’re helping prevent climate change by sequestering carbon in the dirt while you’re at it! Take that, Republicans! Spending the next hundred years breaking down into nitrogen-rich ground cover sure sounds better than finishing that grad degree – especially since those tuition waivers won’t be tax-exempt for long, suckers! 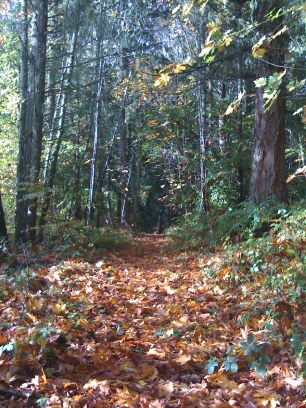 Burying yourself in a pile of nitrogen- and carbon-rich grass cuttings and vegetable scraps is like tax evasion for the 99%. Instead of hiding your money in offshore accounts in Panama, we can hide our decomposing bodies beneath a pile of grass cuttings, sawdust, and vegetable scraps. That way, the IRS won’t be able to find you and take your money when April 15 rolls around. In fact, by that point, you might already have started to decompose! If you’re worried about those bean counters following the scent of your rotting body to take the last $20 bill from your pocket, just add more straw and wood chips to the mix.

Is there anyone out there who hasn’t seen a crisp pile of autumn leaves – on your Monday morning commute to the job where you’re paying into a retirement system that’s going to be bankrupted by old white guys before you turn forty – and thought about jumping in and staying there until microorganisms begin to break down your flesh?

Being alive is hard enough as it is, and the Republican tax bill is going to make you wish you weren’t. That’s why I encourage you to #OptOut by composting yourself beneath with a healthy, well-rounded mix of plant matter, animal dung, and sawdust. Evade taxes, fight global warming, and break free from the system – all by slowly decomposing into compost that will feed the world for generations to come!