The Snow Leopard by Peter Matthiessen I half-borrowed, half-stole from my sister almost two years ago when I was re-embarking on a journey I began almost a decade ago: a journey into an understanding and perhaps undertaking of Zen Buddhism. I’ve flirted with Zen, and more vaguely with meditation, for ten years now, never with much persistence or dedication. The Snow Leopard leapt back into my life shortly after I had picked up a dense but rewarding book called Essays In Zen Buddhism from a local used bookstore. With these two books in hand, between February and May of 2015, I reconvened learning about Buddhism, an experience I’d nearly forgotten since my freshman year in college. 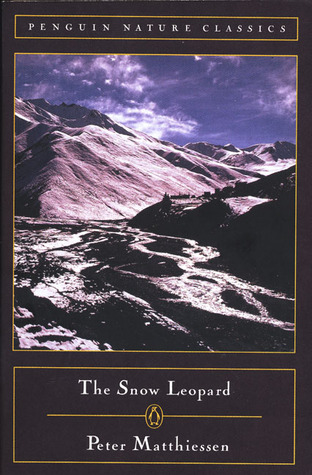 Speaking of “dense but rewarding,” The Glass Bead Game by Herman Hesse perfectly fits that description. It similarly came into my life from the hands of a friend. Gifted to me in exchange for my promise that I would pass it along after I finished, just as my friend was doing right then, I agreed to take the book with me as I traveled from California to Oregon in the hopes of making my new home there.

Both books are about the struggle of two men who devote their lives to introspection, meditation, and the cultivation of one’s spiritual garden, to understand this spirituality in the context of a worldly experience. Both books are, in some sense, about the struggle to achieve enlightenment on the top of the mountain, and retain it even as the holy man descends down into and is corrupted by the town, the village, and the sweat, rot, and dirt of humanity.

The Snow Leopard is an outward and inward travelogue, recorded from Matthiessen’s intricate journal entries about his unforgettable trip to the heart of Nepal. Along with his friend the scientist George Schaller, Matthiessen ventures into an age-old civilization, untouched by modern conveniences, at Crystal Mountain in the region of Shey, a tiny village nestled above 17,000 feet in the Himalayas. Schaller, or G.S. as Matthiessen refers to him, is there to study and observe the mating habits of the extremely rare blue sheep. Matthiessen has decided to accompany his friend in pursuit of a more spiritual quest: to meet the Lama of Shey who lives at Crystal Mountain, and seek enlightenment in the frigid, rarefied airs of the mountains. The two men dream of seeing the even-rarer snow leopard while they’re there, which becomes a metaphor for Matthiessen’s quest for enlightenment.

Although Matthiessen makes a great show to himself and to the reader of not expecting anything, of not expecting to achieve this spiritual triumph while on this journey, it’s clear throughout that he is hopeful, that he is dedicated and earnest in his quest, and that it is this very earnestness that will hold him back from true achievement.

The Glass Bead Game depicts the entire life and times of a fictional man named Joseph Knecht, an inhabitant of a future world where an entire city, called Castalia, has been set aside for a monastic-style dedication to the life of the mind. Hesse simultaneously mocks the biographical genre with his overly-detailed, obsequious biographical style, while also critiquing both fascism and the descent into pop-culture journalism he saw in contemporary culture. But it is also the careful study of a fictional man whose growth and development is mirrored in so many of Hesse’s other works, and the book morphs towards the end into this second kind of novel.

At the center but also the periphery of the whole story is the Glass Bead Game itself, whose rules are never fully explained, but which is described as a synthesis of many different kinds of studies, from math to music to physics to literature to philology and more. The Glass Bead Game, which Knecht excels at and dedicates his Castalian life to, is depicted simultaneously as the pinnacle of academic synthesis and a beautiful, almost spiritual exercise to witness and participate in, but also as a symbol of the tipping point into futility, uselessness, and moral decay.

The tension between the monastic/academic and the political/worldly lifestyles are reflected throughout, as Knecht as a young schoolboy is set up as the defender of Castalia, those hallowed grounds where the life of the mind is cultivated intensely and purely, without distraction. His antagonist is Plinio, the son and heir of a wealthy politician, who argues that the life of the mind must only be used for the benefit of the worldly, and that the cloistered academics at Castalia are spoiled and dependent upon those who they disdain as uncultured and unrefined. As Knecht’s “biographers” emphasize Knecht’s lifelong admiration for Eastern cultures and his dedication to meditation as a key aspect of his academic lifestyle, it becomes clear that Hesse sees spiritual meditation as a way to bridge the gap between the worldly and the monastic. Throughout the book, Knecht is described as having certain “awakenings” which could be compared to Zen moments of satori, awakening to the true meaning of his life.

Towards the end of his book, when Knecht has come as far as he can within the world of Castalia and the Glass Bead Game, and perceives himself to have achieved the pinnacle of his development within this world, he begins to experience another awakening, which leaves him thirsty for interaction with the outside world, a society he has barely known since his early childhood. He reconnects with his old friend Plinio, relinquishes his post as Magister Ludi of the Glass Bead Game, and departs the city of Castalia with hardly a backwards glance for the opportunity to put everything he’s learned into practice in the outside world. The master has achieved enlightenment, in other words, and seeks to descend back to the world with lessons and wisdom to impart to the people there.

The story of Joseph Knecht of Castalia ends shortly thereafter, and three short stories begin. Supposedly they were written by Knecht in his younger days, imagining three of his previous lives in various forms and disparate parts of the world. These three lives show Knecht always living as something of a holy man, from a Rainmaker in a primitive tribe to a penitent confessor on the outskirts of society to a young prince deprived of his rightful rule who opts instead for a life of quiet meditation.

Somehow, despite having started The Snow Leopard almost a year and a half before The Glass Bead Game, my experience of these two books converged onto the same timeline. I picked up The Snow Leopard again just two months ago while hiking in Joshua Tree National Park, when I was already halfway through with The Glass Bead Game. I began reading them simultaneously and eventually ended up finishing them both on the same day this past weekend, on a lazy Sunday morning in bed. Although the books are worlds apart in style and structure, I couldn’t help but be impressed by the similarities between the two narrators, both brilliant men thirsty for spiritual awareness but ultimately unable to find contentment and give up their worldly ambitions and attachments. Torn between two worlds and two lifestyles, Knecht’s various incarnations always seem to find a way to true spirituality, but not without great cost and some form of worldly self-sacrifice. Matthiessen, similarly, finds moments of enlightenment in his meditations at Crystal Mountain, but struggles to retain that inner peace on the journey back down. He is irritable, impatient, and unhappy to be leaving, unable to revel in the simple joy of the moment he found in the high snows. Too late, Matthiessen realizes that one of the sherpas who accompanied them throughout the journey was the quiet mentor in patience and presence he needed all along.

Both books were humbling and inspiring. Both are incredible examples of writing prowess, in entirely different styles. Both are living proof that you can seek for a lifetime and still not truly find.

I’d recommend The Snow Leopard to anyone who is a thinking, feeling person, as it is a magificent piece of writing that I would think would be accessible to anyone who meets the above description. I’d recommend The Glass Bead Game more carefully, as it can be austere and unapproachable at times, although there’s a vein of humor that runs throughout, which gives it a little more lightness and ease. It can be overly academic, which is great if you’re into that kind of thing, but vastly less so if not. The second half of the book, in my mind, vastly made up for the first, but the first half is necessary to tell the story properly. Only read if you’re prepared for an in-depth, challenging journey that might take you months to work through.

2 replies to Book Review: THE SNOW LEOPARD by Peter Matthiessen, and THE GLASS BEAD GAME by Herman Hesse