Writing dialogue, is, in my opinion, one of the most difficult aspects of writing. Description? I’m all over that. I’ll describe shit to you all day long. Character development? Challenging, but can come naturally as the plot moves along. Plot? Easy. If you ever took an English class in high school you know how to write a half-decent outline to get you through your book. 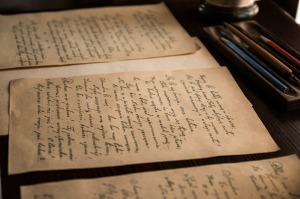 But dialogue? That doesn’t come naturally to me. Which might be a bit of a surprise, considering that most of what humans do, on a daily basis, is dialogue: with ourselves and with those around us. We have our internal monologue that runs constantly in our brains (and if you’re like me, your internal monologue doesn’t ever fucking quit) and our external dialogue we use to communicate with our co-workers, our friends, and the cashier at the coffee shop who doesn’t understand why you don’t want whipped cream on your non-fat venti caramel latte.

Just kidding. No one gets a caramel latte without whipped cream. That’s about as pointless as getting a burrito without guacamole. Come on, people.

Anyway, dialogue. It’s hard, despite the fact that we spend much of our lives creating and listening to dialogue in the real world. So why is it so hard to write?

There are a few reasons. First, it’s all too easy to fall into the trap of writing each of your characters in the same voice – yours. We all have our internal monologue, and we spend most of the day listening to that little voice in our heads run on and on and on. It’s easy to get caught up in the trap of writing each character as though they talk exactly like you do. Second, dialogue can easily fall into the trap of being cliche and trite. Moments that are supposed to be powerful – when one character is giving advice to another, for instance – can quickly fall flat if they sound like every other sound bite we hear bounced around or read on motivational posters. And finally, dialogue at its best is an expression of each character’s identity, a way to differentiate between them and identify who’s speaking – even without dialogue tags. Achieving this kind of differentiation between speaking styles, however, is extremely difficult and requires both writing skill and intimate knowledge of each of your characters.

So how can one go about improving dialogue and creating clearer, stronger characters? Here are four tips I’ve learned that have helped to improve my own dialogue. I’m by no means a Zen Master of Dialogue, yet, but these tricks have definitely helped me along the way.

1. Identify ‘tics’ or speech habits your characters have acquired throughout their lives to help differentiate between them. I learned this trick from Fyodor Dostoyevsky’s The Brothers Karamazov. Nothing I’d read before this book did such a fantastic job at defining the different characters through their speech habits. Mitya, the oldest of the three brothers, was the most distinctive in his speech habits. He would get so passionate in his speech that he almost couldn’t finish sentences, would exclaim things that made no sense or were wildly inaccurate, would be unable to control himself as he was talking. By contrast, Ivan, the most rational of the brothers, would speak calmly and mostly plainly, though sometimes he, too, would break out into fits of emotion. Each of the characters had such distinctive tics – words, little phrases they had grown accustomed to using – that they were clearly distinguishable from each other.

2. Work character traits into dialogue. This one I learned from Jane Austen, and subsequently worked it into my own writing. Elizabeth, the main character in Pride and Prejudice, is intelligent, fun-loving, and a little bit sarcastic, and so she often makes little underhanded jabs at people, even poking gentle fun at people she loves, like her older sister Jane, or her father. Jane, by contrast, is much quieter and more earnest, more optimistic. She is constantly expressing best wishes for people, and her never-ending belief that everything will be okay in the end, somehow. And their two youngest sisters, Kitty and Lydia, are neither of them the brightest, but full of energy, and so they’re constantly cooing, shouting at each other, and fussing over hats, dresses, and scarves. Each of the girls’ personalities are defined and strong through Austen’s use of differentiating dialogue.

3. Dialogue is one of the few cases where the ‘Actions speak louder than words’ exhortation doesn’t apply. What I mean by that is that some writers rely too much on dialogue tags to communicate what’s in the dialogue itself. For instance, a common pitfall is to add too many adjectives to describe how a thing is said. “‘I love jasmine tea!’ Sela shouted enthusiastically,” is not as powerful as “‘I love jasmine tea!’ Sela shouted.” In this case, the punctuation and the phrasing in the dialogue itself is more than sufficient to communicate Sela’s enthusiasm for jasmine tea. Reading For Whom The Bell Tolls by Ernest Hemingway taught me how powerful dialogue can be without any attached adjectives or descriptors. Dialogue should, in many cases (but not all) be self-expressive. What I mean by that is that it shouldn’t require any additional description to communicate the emotion or idea being expressed within the dialogue itself. These adjective tags become especially cumbersome in large sections of dialogue. In those cases, it’s important that the dialogue stand by itself, with minimal tags, just to identify who’s speaking.

4. Keep it short and snappy. Dialogue shouldn’t be full of extraneous words and rambling messages, unless they’re clues about future plot developments or character foreshadowing. Even if you have characters in your story who tend to ramble or aren’t very concise, they still shouldn’t be given pages of screen time. You can communicate verbosity without devoting paragraphs of dialogue to a character’s ramblings. And if unnecessary verbosity isn’t a fundamental trait of one of your characters, simplicity of dialogue will read much more powerfully than dialogue diluted with unnecessary words, phrases, or anecdotes. Be simple, precise, and to the point.

And finally, this isn’t about dialogue itself, per se, but is every bit as important: Break it up. Dialogue can quickly get overwhelming and lengthy, even when you (the author) might think you’re just giving your readers some much-needed background information. Even when using tip #3, it’s still all too easy to go overboard, especially when one character is imparting a lot of information to another. For instance, in The Sowing, one of our characters, Rhinehouse, takes Remy and two of her friends back into his private research lab. Rhinehouse has a lot of explaining to do, and much of it is scientific in nature, which meant that we had to take special care not to bombard our readers with hard-to-follow information and scientific language. We were careful to break up that scene with descriptions of the plants in Rhinehouse’s lab, and with some humorous moments between Remy and Soren. Without those little moments, the chapter as a whole would have been overwhelming. Even if your characters are arguing among themselves, large sections of dialogue can quickly get tiresome, so it’s important to break it up with little notes about facial expressions, body language, or scenery description.

So, there you have it! My tried-and-true dialogue-improvement tricks. What tricks do you use to improve your dialogue?

Good luck and thanks for reading!