Dear Mr. Gary M. Kelly, C.E.O. of Southwest Airlines, and everyone else from the top of the chain on down,

As humans sometimes we are confronted by moments of inexplicable sadness, happiness, confusion, exuberance, love, or anger. As humans we also experience moments that are 100% explainable – moments of grief that lead to sadness. Moments of joy that lead to happiness. Moments where we have life-changing decisions ahead of us that lead to confusion and worry. Moments of love shared between two people looking at the stars, or between a mother and child catching fireflies in the summer night. Moments that make us so angry we want to punch walls – or the person who made us feel that way. 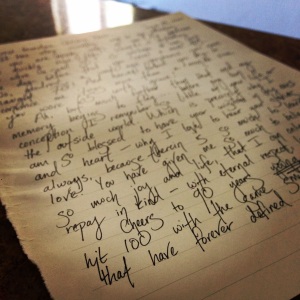 I didn’t always keep a journal. A much-loved friend of mine gave me a blank composition notebook, hand-decorated on the outside, as a Christmas present in 2006. I’d tried keeping a journal many times before that, and always gotten a few entries in before my dedication wavered and the journal was set aside to founder. But this time, for some reason, it stuck. Maybe because that year, 2007, was a year of such dramatic change for me that I felt almost obligated to record it. Compelled, somehow. I graduated high school. I went to college. I fell in love. I made some of the best friends I’ve ever known. And I wrote all of that down, dutifully transpiring those moments as a record of how I, as a teenager, was maturing into an adult.

I filled up that journal ten months from the date I began it, and I immediately went to the drugstore to buy another composition notebook, almost identical, so that I could continue the story, the record of who I had been and who I was becoming. Poems, song lyrics, quotes, memories, short stories, fears, loves, dreams. The sum total of who I am.

The journal your employees lost on Sunday, August 10, 2014, was the third such composition notebook I’d filled in. It was more than three-quarters full with three years of history, and some of the most formative years of my life. I was looking forward to finishing it before the New Year. It began in 2011, the year I felt so hopelessly lost I couldn’t tell right from wrong. It told the story of how I met the man I’m still in love with to this day. It told the story of some of my most exciting adventures, the three months I spent in France, alone on the other side of the world. It told of my travels from one side of this country to the other, from one side of Europe to the other. It told of how I came to be where I am today, and who I am today. Dreams, visions, meditations, wonderings, musings, curiosities, banalities of no interest to anyone but myself – these are all the mysteries contained within the pages of the composition notebook that I gave into the care of Southwest Airlines and was not returned to me.

I beg you to find it.

I handed my bag to your employees – a backpacker’s bag, with the composition notebook securely clasped into the front pocket – as I boarded the plane. When I retrieved the bag at the carousel, the journal was gone. Watching the blank looks on the faces of your employees’ at the ‘Lost And Found Baggage’ claim as I tried to explain that this journal is financially worthless but emotionally invaluable made me think that perhaps you had better hire more sympathetic Lost And Found employees, as I found no comfort with them. Or at least ones who are better at pretending to be sympathetic. One of them scrawled a phone number for me to call on a torn-off piece of paper, and took down my own notes on a separate piece of scrap paper. There were no forms to fill out, no reports filed. ‘Call this number,’ was the best they could do. I haven’t heard back from whoever I called, by the way, although I was reassured on the answering machine that my inquiry would be answered ‘as soon as possible’. Whenever that is.

I’ve long told anyone who will listen that writing in my journals has been the single most important factor in the slow but steady process of my self-identification as a ‘writer’. I recommend that every aspiring writer do the same. It has helped develop what little talent I have. It has shown me how to illustrate a life, what is trivial and what is not, what depths there are to personhood. It has taught me to compose sentences and to probe deeper into my subconscious. My journals are the epitome of Socrates’ exhortation: ‘Know thyself.’ Without them, I do not know myself.

If I had to pick a single material possession to save from my house if it were burning down, it would be the box that contains my journals. My phone, my computer, my keyboard, my bike – all of these things are replaceable. My journal – handwritten, intensely personal, disconnected from ‘the cloud’, scrapbooked on the outside with ticket stubs, postcards, receipts – is not. What has been lost, in this case, may never be recovered.

Our identities as humans are composed of our memories, our emotions, the moments we have allowed to define us. For the love of God, give me back these three years, all those words that were so carelessly lost after being so carefully transposed. For the love of God, find my journal and give it back to me.

9 replies to An Open Letter to Southwest Airlines