BRAVE NEW WORLD is considered a classic in literature, a book students are often required to read in high school,  a story that shows the limitations and complexities of utopian/dystopian society. I was told that I had to read it because of the immense similarities between it and my own debut novel, THE SOWING. So naturally, I dug in eagerly, always ready to read a classic and a book that I can potentially learn from. 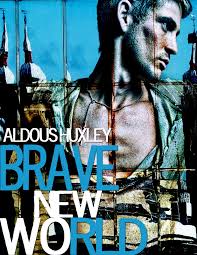 BRAVE NEW WORLD is a story that ducks and weaves through multiple narratives, through multiple characters, each of whom has a tale to tell and a role to play in the world. Set in a futuristic London where worship of God has been replaced with worship of Henry Ford (and expressions like “our Ford” and “Ford!” as an exclamation abound; the dating system is not in After Death but in After Ford), passion have been replaced with happiness, humans are programmed from birth and conditioned through childhood to believe certain truths and to feel certain ways about their caste. Everything is systematically structured; everything is scientifically rigorous and yet mindlessly stagnated at the same time. There’s a caste structure, but everyone’s happy with it because they are conditioned from birth to be so. The Alphas at the top of the pile are proud and dignified in their position, physiologically strong, intellectually secure; the Epsilons at the bottom, deformed, small little people, are equally happy to be doing their simple, mindless tasks, for they are programmed to be content with their world.

This brave new world stands in stark contrast to our own. Consider a few examples. Early in the book the Director of Hatcheries and Conditioning makes the point that, “moral education ought never, in any circumstances, be rational.” Compare this with our own system of ethics, which is based on logic and law (and in some cases religion) and is considered to be ultimately derived from humanity’s facility for rationality. Later, the one of the World Controllers (one of the highest positions an Alpha can hope to achieve) notes that, in the old days, “People still went on talking about truth and beauty as though they were the sovereign goods. Right up to the time of the Nine Years’ War…People were ready to have even their appetites controlled then. Anything for a quiet life. We’ve gone on controlling ever since. It hasn’t been very good for truth, of course. But it’s been very good for happiness.” This is particularly oppositional to our current political climate – where we fight for our freedoms, whether it be the freedom to have an abortion or the right to bear arms, with ferocity. In Huxley’s world, the people traded those freedoms for happiness, peace, and civil society.

But unlike other dystopian societies where a seedy underbelly is eventually revealed or where the controlling body leads to oppression, rather than comfort, in BRAVE NEW WORLD, everyone seems largely content. From Lenina, the gentle Beta girl who is happy to be had by all comers and to have as many men as she wants, to Bernard, the somewhat-unhappy philosopher type who forgets all his malcontent when he is rocketed to fame and fortune, to Bernard’s friend Helmholtz Watson, who questions the underlying world assumptions just enough to get himself exiled to Iceland. Even he isn’t truly unhappy – he just wishes he had the freedom to think a little more.

In fact, the world works so well that the only person who is truly discontented with it is the one who is wholly other. John, a savage who was raised by a ‘mother’ (a dirty, pornographic word among the civilized people who are properly decanted from test tubes) from London (civilization), but who had the ‘misfortune’ of being forced to live among a group of savages (Native Americans, essentially) from the small town of Malpais in America. John was raised caught in between two cultures, welcome in neither. Raised by his mother to idolize ‘civilization’ and all its goods, and raised by the locals in Malpais to consider strength, passion, and spirituality the greatest qualities, John is a tortured soul. His mother was shamed and reviled for her lascivious ways in Malpais; as a result he was considered an outcast to the people in his adopted hometown. He raised himself on an old book of Shakespeare, which taught him the true nature of truth and beauty. But when he finally makes it back to the utopian world he was taught to believe in, he is disgusted by the lack of emotion, by the impurity of sexual culture, by the spectacle he is made into by the eager, ‘civilized’ onlookers. Shakespeare is his only comfort, but Shakespeare drives him mad. And so John is tortured by himself, by his own lack of reconciliation between two foreign worlds.

On a first read I had a hard time drawing any ‘lessons’ or ‘morals’ from this book, which stands in stark contrast to George Orwell’s 1984, which carries a grave warning. On a surface read, Huxley might even be encouraging us to consider following the path he’s outlined in his brave new world. People are at last content; there are no wars, death is both peaceful and accepted, ageing has been conquered, all are healthy, all are conditioned to accept their lot in life. The only thing that holds you back from that is the feeling, from beginning to end, that the society is missing something – and John is the embodiment of all the passion, energy, and vivaciousness that they are missing. But John’s a tortured soul, and his end leads us to believe that perhaps that passion isn’t really all it’s cracked up to be.

As it turns out, I didn’t see many parallels between this book and my own. Perhaps the greatest similarity is the amount of biological and physical ‘conditioning’ that happens to children when they are born into their new society and the resulting creation of a caste system. The similarities end there, though. Our book involves a lot less philosophizing and a lot more adventure; more similarities between our present world and the futuristic one. Also, it seems to me that Huxley’s goal in writing this book is starkly different from ours: he seemed to be writing with the intention of creating a model society and discussing the sacrifices in human nature required to achieve that utopia, whereas we set out with the intention of creating a flawed society that could never be viewed as a utopia.

Ultimately, I learned a lot from Huxley’s BRAVE NEW WORLD, but it wasn’t what I expected. This book is much more complicated than a simple dystopian setup; it’s much more nuanced than Orwell’s 1984. The questions posed in the book are not immediately answerable; they don’t necessarily have answers. What I loved about this book, more than anything, was the completeness of the culture and the strength of the writing. The world is unique and wholly filled out, and it’s the strength of Huxley’s writing that contributes to that. From religion to sports to entertainment to contraception to drugs, Huxley has an answer to every question one could ask about this peculiar and foreign society, all of it laid out in his eminently British prose.

4.5/5 stars. I don’t know if this was ‘life-changing’ but certainly there’s not a damn thing to complain about. Readable, powerful, and philosophical – highly recommended.