I remember spending an inordinate amount of time in my freshman year high school class discussing symbolism. “But what does the albatross symbolize?” we were asked about the Rime of the Ancient Mariner. “But what does the snake represent?” we were asked about D.H. Lawrence’s famous poem. “But what does Antigone’s burial ceremony mean?” At the time, I largely thought this was an overblown thought exercise, one which took up valuable time we could have otherwise spent reading more books, or talking about character arc, or word choice. (I was a writer born.) I didn’t realize until I got older how pervasive symbolism is in culture and in literature, and how important symbolism is as a method of communicating.

Using symbolism correctly and powerfully in your novel can be the difference between a good story and a great story. Why is symbolism powerful? I have two fairly simple hypotheses.

First, they’re visual. A symbol takes an abstract concept – say, freedom – and wraps it up inside a neat little visual package – say, a bird taking flight. You can take a highly nuanced, complex idea (like freedom) and make it visually manifest through the symbolic image of a bird with wings outstretched as it prepares to soar into the sky.

Second, they’re emotional. Take the symbol of a wolf or a lion for power. The evocation of a snarling wolf or a lion roaring is highly evocative of that powerful, and incredibly primal (but also incredibly complex) emotion that tells us to run for our lives – or to cower before the person who is represented by that symbol.

So, how is symbolism put into practice in literature? Let’s look at the Lord of the Rings trilogy. Symbolism abounds here. First and most obvious, we have the Ring itself: a simple, innocuous, gold band. The Ring is the embodiment of evil. It symbolizes decadence, power, and cruelty. These connotations come from the use of rings as markers of status and power throughout Europe, as well as the fact that they are luxury items made of precious metal. In contrast, we have the White Tree of Gondor. The Tree is a natural thing, a piece of the forest, a thing that grows rather than is manufactured. Tolkien put loads of environmental  symbolism into his books, and the White Tree is a perfect example. The inherent conflict between the created, manufactured Ring, the embodiment of evil, versus the White Tree, a natural and wholly good thing, perfectly represents the philosophical differences between Mordor and the forces of good.

Let’s look at another popular example, where the symbols were a little more contrived (but no less awesome!): Harry Potter. Harry himself is represented by the lightning scar on his forehead, a sign of power. His nemesis, Lord Voldemort, is represented by a snake, a traditional symbol of secrecy and treachery, and his followers by the symbol of a snake entwined with a skull. His father is represented by the stag he morphed into as an Animagus, and his godfather Sirius by an enormous black dog. Albus Dumbledore is often represented by his phoenix, Fawkes, the symbol of reincarnation and revitalization. Each of these symbols is connected with the associated character very early on; We know from the first chapter of Harry Potter and the Sorcerer’s Stone that Harry has a lightning scar on his forehead; we know from Chamber of Secrets that Dumbledore has a phoenix (which dies and is reborn in front of Harry’s eyes) and that Voldemort can speak to snakes and uses a basilisk to carry out his bidding; we know from the Prisoner of Azkaban that Sirius is represented by the black dog, also the symbol of death (which is important foreshadowing because Sirius dies in the 5th book).

Each of these symbols becomes closely associated with the character, and each of them brings along a connotation that accompanies that character closely throughout the books. Even colors are strongly correlated: Green is the color of the Killing Curse as well as of the evil Slytherin House (although Harry’s eyes are deep green – perhaps representing complexity?), while red represents Gryffindor, the more peaceful Disarming curse, and the always-endearing Weasleys, who all have red hair.

Symbolism, as you can see, creates powerful connections in our minds. Humans naturally associate ideas with objects, and emotions with images, and writers have to use those associations to our advantage. So why does this work so well, and how can we use symbolism to make our books better? 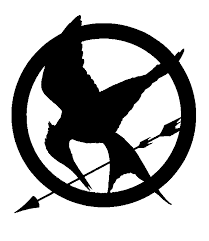 Here’s where Suzanne Collins, author of the Hunger Games series, demonstrates her mastery. Think of the most definitive moments in the Hunger Games. Here are my favorites: 1) When Rue dies and Katniss covers her body with flowers, sings to her, and flashes the camera the three-fingered salute. 2) When Katniss holds the poisoned berries out to Peeta. 3) When Cinna turns Katniss into the Mockingjay symbol onstage in Catching Fire. These moments, which symbolize rebellion against the Capitol, are powerful because they have strong associated imagery. You can see Katniss holding the berries out to Peeta, so that they will both die rather than giving the Capital one lone victor. You can see her singing to Rue as she covers her body with wildflowers, honoring Rue’s life and death, expressing solidarity with District 11. You can see Katniss’ dress going up in flames as she turns physically into the Mockingjay, the symbol of the rebellion. Suzanne Collins is a master of using imagery to symbolize emotions and actions, and this is one of the things that has made her book wildly successful.

As writers, it’s our job to capitalize on the inherent strength in visual symbols and turn those symbols into emotions that will make our readers swoon. I’d love for you to join in the conversation. What are some of your favorite examples of literary symbolism? What symbols have you written into your book(s)? How can we use symbolism more powerfully to express ideas, actions, and characteristics?

Thanks for reading! Did you enjoy this post? If so, I’d love a signal boost. Please share on your favorite social network and help me reach a wider audience. Thanks!

4 replies to Symbols Are Power