READY, PLAYER ONE is a vivid and compelling story: a fast-paced sci-fi novel that takes place largely in virtual reality, with a double helping of 1980s pop culture references and video game trivia. Centered around the quest to find an “egg” hidden inside this virtual world that contains the key to the largest private fortune ever amassed, the book navigates breathlessly and effortlessly between computer science, video game lore, teenage angst and romance, and of course, that most serious question of what defines and constitutes our reality. 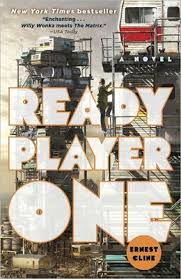 READY, PLAYER ONE was recommended to me by two different people over the course of two months, so I figured that was a strong enough argument to download and read the book. When I had a break in my arduous classic and non-fiction reading schedule, I snagged this book and snuggled in with it on my Kindle.

The premise of the story is this: The vast majority of interpersonal interactions on Earth now take place inside the virtual reality world known as the OASIS, which was created by the reclusive genius and multi-billionare James Halliday. Upon Halliday’s sudden death, his “avatar” reveals the existence of an immense, world-spanning quest set inside the OASIS to find what Halliday dubbed a hidden Easter egg. The first person to pass through all the challenges and find this incredibly well-hidden “egg” will immediately become the inheritor of Halliday’s entire fortune and, essentially, take over control of the OASIS.

As you can see, that’s a lot to explain. Which also explains why the book got off to a slow start.

The first gulp of the book is largely exposition – which makes sense, considering how much there is to explain. First, some vague introduction about the OASIS, a few comments about the current state of the world (“Normally, the newsfeeds didn’t interrupt everyone’s interactive sitcoms and soap operas unless something really major had happened. Like the outbreak of some killer new virus, or another major city vanishing in a mushroom cloud.”), and some background information on Halliday. Then, Cline starts digging into details. First, an immensely precise description of the video that sets off this contest for the egg. Then, shortly after that, a several-page long description of precisely how and why “real life” on Earth sucks so, so, so much. Which of course segways into why our hero, Wade Watts, an adolescent male living in what we would call abject poverty, spends so much time in the OASIS system. And then we get into a more detailed analysis of James Halliday’s life and times, and then of how the OASIS works, and then…

My point is: there’s a lot of back story. And yes, it does slow down the introduction. And while a lot of it is interesting, I’m not sure that it merited the level of attention that Cline gave it. I’m sure there were several paragraphs (okay, maybe several pages) of description and backstory that could have been cut out to make the introduction move faster.

But once you get past all the exposition and into the fun part – watching Wade  and his friends and competitors frantically try to solve the puzzles before anyone else does – the book really starts to move. No longer bogged down by history and complicated summaries, the book begins to immerse you in Wade Watts’ world, just as Wade relishes his immersive experiences in the OASIS. Cline draws for us a powerful, but surprising hero. Wade describes himself as overweight, not terribly attractive, and not even necessarily the smartest guy in the room. But Wade has two character points that make him what I would consider an “ideal” hero for a young-adult story: First, his success comes not from intelligence, good looks, or talent, but rather from his dedication and his complete adherence to the task at hand. He is proof positive that hard work really does pay off. Second, he has a strong sense of morality and of justice that guides him through his encounters with – well, everyone, from friends to mortal enemies to neutral parties. Wade never hesitates to give credit where credit is due; he is always generous, gracious, and cognizant of what he owes to those around him.

Under the name of Parzival, after the Knight of Arthur’s Round Table who found the Holy Grail, Wade becomes the first avatar in the entire OASIS system to decipher the first clue that will ultimately lead to the egg. There begins the transformation from exposition into action, and Cline never looks back. Wade, alias Parzival, along with hundreds of thousands of other egg hunters, nicknamed “gunters”, devotes his life to exploring and deciphering the clues that James Halliday left behind. When he becomes the first person to find the Copper Key and cross the First Gate (one of three thresholds that will ultimately lead to the egg), Parzival finds himself rocketed to fame, money, and status. And, suddenly, the target of a lot of hostility. So much hostility, in fact, that it quickly becomes evident that his real-life persona, Wade Watts, is in life-threatening danger.

And thus sets off the rest of the book. There is a tangible sense of rush to solve the puzzles, to get to the next step, to beat the next level of the game, and in the process of all of it, to keep your real life, physical body away from the bad guys. And Cline does an excellent job of dangling the bait in front of us, luring us into the next passage, the next page, the next mystery. In a strange way, it’s like reading a video game – the most complicated video game ever designed, set inside the most complicated world ever imagined, full of infinite possibilities (literally, infinite – when you can code anything into existence instantly and defy the laws of nature in a virtual-reality world, why wouldn’t they be infinite?). The whole thing can essentially be boiled down to the structure of Pac-Man – avoid the ghosts and eat all the goodies and you will win eternal glory and fame as your name gets rocketed up the scoreboard.

Aside from the slow-to-start introduction, I think the one thing that made the book less accessible was the endless, overwhelming cultural references. I, quite frankly, don’t know shit about 1980s culture, and have never really bothered to learn. This book was a crash course in the subject – not that I was necessarily a willing participant. I fast-forwarded past a lot of the references, whether to old Atari-style video games, bizarre Japanese TV cartoons (that I feel relatively secure in saying that less than 2% of Americans are aware of), or ’80s bands like Rush. I guess I wouldn’t make a very good gunter. Regardless of my skill as an egg hunter, the overload of references slowed the book down.

If you’ve read READY, PLAYER ONE, what did you think? What are some of your other favorite sci-fi books out there?

4 replies to Book Review: “Ready, Player One” by Ernest Cline