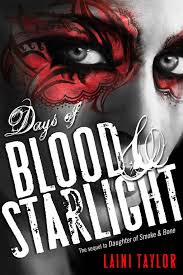 In June of this year, I read and reviewed the first book in Laini Taylor’s bestselling series, “Daughter of Smoke and Bone”. I called it–and I was not alone in this–“young adult fiction”, for its fantasy elements, its playful and inspired prose, and its plot-driven, fast-paced machinery. This second book, however, defies that categorization. Maybe it is still fantastical and otherworldly. Maybe it does still have some elements of romance and coming-of-age. Maybe it is, at times, comedic and lighthearted.

But mostly, it is a war novel. [Warning: from this point on, there will be spoilers. If you have not read the first book, do not continue.]

There are no guns, poison gases, or paratroopers; no trenches, rationed foods, or drones. There are, however, angels who slaughter innocent chimaera children, and devils who retaliate by slicing smiles into the angel’s cheeks (think of The Joker’s scars in The Dark Knight). Burning cities. Slaves. The genocide of an entire species. Whatever this book is, it is decidedly not innocent. If it is a “young adult” book, it is that because it introduces violence and death to young adults in a way that, because it is foreign, may be somewhat easier to deal with.

At the middle of all this not-innocence, and both burning with guilt, are the two central characters of the last book, Akiva and Karou. Akiva, an angel; Karou, once a chimaera named Madrigal, resurrected in human form. In Karou’s previous life, as Madrigal, she and Akiva fell in love and dared to dream of a world where chimaera and angel did not mercilessly slaughter each other. But things did not turn out the way they dreamed. Madrigal was executed while her lover looked on. Akiva took his revenge upon the chimaera for slaughtering his lover by destroying their city and slaughtering thousands of them himself – earning himself the name “Beast’s Bane” in the process. And when Karou reclaimed her memories as Madrigal, she realized what she had done: fallen in love with an angel who destroyed everything she ever knew.

Guilt defines their actions. Karou, now living with the chimaera who revile her as a traitor – but who need her for her ability to resurrect them, to build new bodies for their souls to inhabit – slinks around the kasbah she has brought them to, afraid of their retaliation, afraid of herself and what she has done. She builds new bodies for them, sacrifices her pain for them – for pain is what makes the magic work – as some small tribute to pay her people back for the devastation she brought upon them. Akiva has rejoined his people and reclaimed his place as a soldier in the army, but he, too, struggles to overcome his guilt from the past. His anger and the slaughter it inspired haunt him, and he refuses to kill any more chimaera.

This is a war book. Whereas the first one had dark moments on a backdrop of lightness, discovery, and humor, this one has occasional spots of humor and fun on a backdrop of warfare, anger, guilt, and terror. Even the relationship between Karou and Akiva – the two romantic heroes of the story – is dark and fearful. Though they see each other many times throughout the book, they only touch once, and it is not a kind or gentle touch but one that separates and distances them. Whereas in Daughter of Smoke and Bone, they are drawn to each other like magnets, lovers who cannot be kept apart, in this book, there is tension and anger in every minute space of their interactions.

With Days of Blood and Starlight, Taylor leads us tentatively into this world of revenants and hamsas, of thuribles and glamour, of wings, horns, and teeth, casting comparisons and shadows of our own.  The Emperor of the Seraphim rules the world of Eretz with a totalitarian hand. There are vicious soldiers and innocent villagers on both sides. Farmland, homesteads, and rural pastures dominate the landscape, while the cities are places of glamour, corruption, and betrayal. Palace politics are no less brutal in Taylor’s fantasy world than they are in our own. The elements of the fantastical and the magical are still there, and there is always more to discover, but the great mysteries were unveiled in the last book. Here, she expands and builds, but this book is less about the magic and more about the horror. The grief is ever-present; the guilt is palpable.

I gave the last one 3.5/5 stars. While I am no longer going along with the oversimplified idea of “stars” (as if books could be reduced down to a simple number analysis), I do think that this one is as good, if not better, than the last one, though it is also far more serious. There is heartache and tragedy, as well as cruelty, destruction, and death. If there are moments of joy and comedy in this book (and there are) they are fleeting and quickly eclipsed by the larger, looming darkness of war and survival.

If you haven’t read the first one, do it. And then read the second. They are dancing tapestries of writing, and they are not to be missed. The link to the Amazon page for this magnificent book is here.