It’s very popular among writers to spend a lot of time hemming and hawing over the grand question of Why We Write. I think almost every one of my writer friends has penned at least one blog entry with that exact title. I’m not saying this as an accusation. I haven’t actually done the same thing, but I’ve thought about it, many times. It’s a great exercise. It forces you to look at yourself in the mirror and say, I am doing this for something other than the money. I am doing this for something other than the fame. It’s also a way to come up with a half-dozen ways to tell your friends why you keep doing this stupid, insane thing that sucks up your free time, doesn’t make you any money, distracts you from your friends, and keeps you perpetually as sleep deprived as a third year college student.

It’s the same with runners. Often, you have to explain to well-meaning friends and family that running is actually something you enjoy. The problem is, this basic fact doesn’t make a lot of sense. When you run, you’re cutting into nap time. You’re cutting into time with your family. If you’re a writer, you’re cutting into writing time. You’re beating your body in a thousand different ways. Knee pain, back pain, and soreness all become intimate friends. You’re submitting to self-imposed torture for as many miles – which translates to many thousands of steps – as it takes to finish that run. You do that three to five times a week, minimum, if you want to make progress. When you sign up for a race, you’re paying – paying! – for the privilege of waking up at a godforsaken hour of the morning, eating oatmeal for breakfast, shivering in the cold for forty-five minutes, old-man-jogging for anywhere from six to thirteen to twenty six to fifty miles alongside hundreds, or thousands, of other weirdos who also thought this was a good idea. And at the end of it all you are rewarded with free water, energy gels, a banana, and the endless admiration of your friends and other runners. 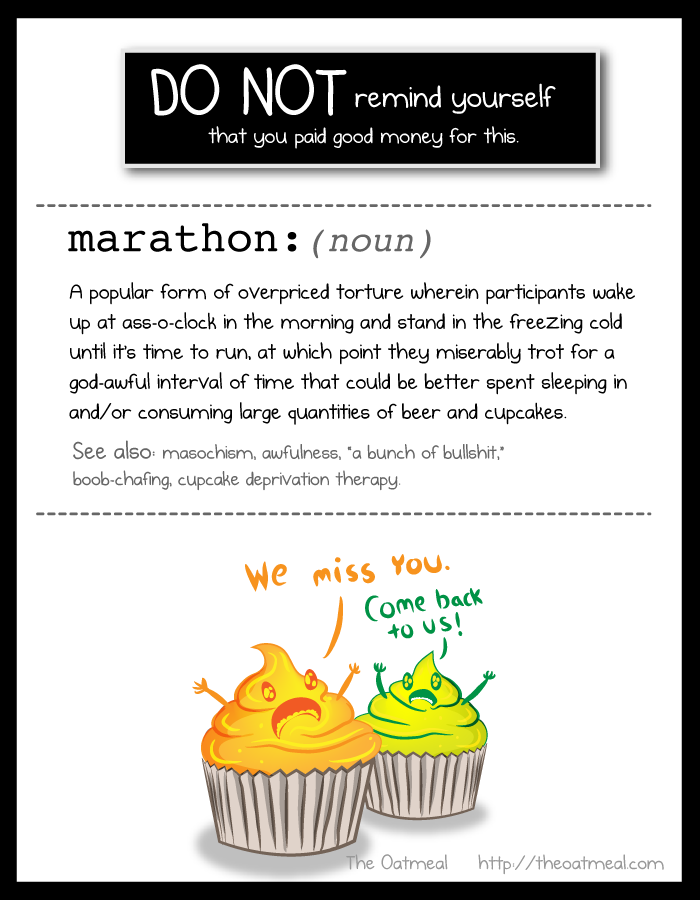 Why the actual fuck would anyone in the modern world subject themselves to this?

We have naptime. We have indoor heating and air conditioning. We have pools and couches and down comforters and Netflix and chill and refrigerators constantly stocked with food and iPhones and video games. We literally have people that bring pizza and Chinese food to our doors. We have alcohol and prescribed marijuana and a revolving door of movies delivered to our computers. We have books, comic books, cookbooks. Why the fuck would anyone want to go outdoors, into the real world, just to subject themselves to fifteen minutes to five hours of running, without food or water, up and down hills, in the cold and snow and heat and humidity? I mean, didn’t we specifically invent the social contract and the barter system so we could avoid doing shit like this?

For some stupid reason, I’ve been running off and on for eight years now. Even I was confused when I impulsively registered for my first half-marathon two years ago. I was astonished when I somehow completed the race a few months later. Just last night, I made the financially unsound decision to pay over a hundred dollars for the privilege of running another half-marathon in Oakland in the spring.

I come back to running over and over again, no matter how many times I stop.

When I started training for my first half-marathon in February of 2014, I assumed, at the time, that I was going to lose weight. I assumed my body would magically mutate into that of a Victoria’s Secret model. I assumed I’d wake up the day after the race with a flat stomach, killer abs, and a thigh gap Katniss could shoot an arrow through. When none of those things happened, it turned out, much to my surprise, that I did not give one single flying fuck. 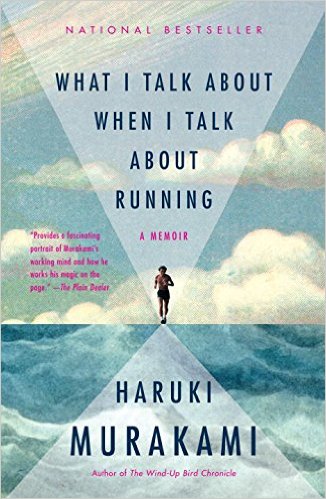 Running makes me feel like if the zombie apocalypse happened, I could outrun those slow motherfuckers. If Godzilla came after me, I’d just run up his tail and chill out on his head for a little while. If Donald Trump gets elected and a bunch of right-wing nutjobs come after me with AK-47s and confederate flags, I’ll run through the forest and over mountains to Canada. If a serial killer tries to eat the flesh off my bones, I’ll run at him, deliver a flying kick to his nutsack, and run away cackling at my superior athleticism.

Even when the enemy is myself. Even when the battle is for self-confidence, willpower, or moving on from a trauma. Even when my only hurdles are things I put in place long ago. When I’m racing towards a finish line – no matter how slow I’m going or how beat-up I feel – all those problems are silent.

In 2014, when I was a few weeks away from my first half-marathon, I wrote a blog post called Writing and Running: On Triumph And Sacrifice. A week after that race, I wrote what ended up being my most successful blog post ever: Half-Marathon: Or, How I Learned To Stop Worrying And Love My Body. A lot of people wrote in, via the comments, that they would love to follow in my footsteps and wanted to know if I would write a post about my training regimen. I never did that. This time, I’m going to. I’ll blog occasionally about my training plan and how it’s coming, along with tips, tricks, and (hopefully) funny anecdotes along the way.

If any of my blog readers want to follow along with my progress and participate themselves, I’d love to read your posts and check in to see how your training’s going. Just leave a comment and I’ll come say hi. If you’re a writer who also runs, so much the better! Let’s chat. Because bonding over two forms of extreme masochism is better than one!