Warning: This is a controversial post on a controversial subject. If you don’t enjoy having your assumptions challenged, please close this tab now and feel free to return when I’m writing about lighter, happier matters.

Thanksgiving is one of my favorite holidays. Not least because it’s one of the few times of the year when we are allowed to stuff our faces without restraint, but in equal parts because it’s a holiday that encourages a bit of introspection. What are we thankful for? In years past, I’ve had different things on my mind, and different things to be thankful for: that my aunt’s battle with cancer was going well, that she was out of the hospital and able to share a meal with us; that I was lucky enough to have a job in the depths of recession; that I had returned home safe and sound from traveling abroad. But this year, there are some different things I’m thankful for, that I wish I didn’t have to be.

Here are some things I shouldn’t have to feel grateful for:

1. My skin is colored in such a way that I will most likely never need to fear unwarranted police violence and brutality;

2. My skin is colored in such a way that I will most likely never be automatically assumed to be a criminal, a drug addict, or a lazy bum profiting off the work of others;

3. My skin, and that of my family members, is colored in such a way that I will most likely never have to worry about losing a parent, sibling, or child, to violence that results from stereotyping, misunderstanding, or wrongful assumption.

But I wish I didn’t have to be.

In the newest installment of The Hunger Games film series, Katniss Everdeen, the heroine, takes the battle to the streets of the districts and the capitol in order to fight against the oppressive system that has taken her freedom and her right to life away from her. Millions of people across America have read or watched Katniss’ story. We have sympathized, empathized, and wished we had her courage, her strength, her charisma. We love Katniss, and we love her story.

In the first two books of the series, Katniss is literally forced into violent conflict. There is no way to be a pacifist and survive the Hunger Games, which she does, two years in a row. She hunts her enemies, she kills, and in most cases, she has no regrets. But in the third book, MOCKINGJAY, Katniss steps into a new role, one for which she volunteers. She becomes the symbol of the revolution. She fights, not because she has to, but because she believes the system is unjust and cruel. She knows there’s a better system, one which doesn’t starve her family and her friends, one in which no one is ever sent to the arena in a fight to the death. She knows that freedom is something she can believe in; something to fight for. But she fights willingly. She shoots planes out of the sky. She hunts soldiers in the streets of the Capital. She films videos encouraging other people to do the same, to fight for their freedom, to kill in pursuit of liberty. And we, as onlookers, love her for it. 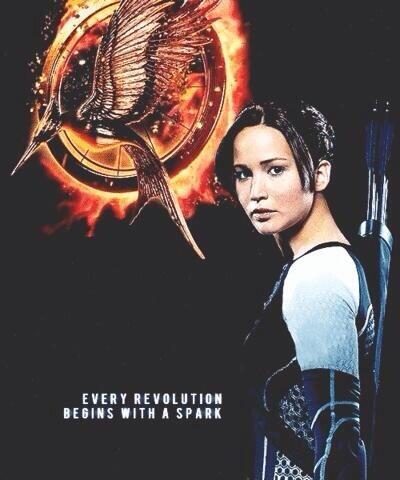 So why is it that when hundreds of thousands of people of color take to the streets to demand freedom from an unjust society, one which puts them in prison at nearly six times the rate of caucasians, one in which they are nearly two and a half times more likely to live below the poverty line, one in which health care and education consistently fails people of color, depriving them of equal opportunity to “life, liberty, and the pursuit of happiness”, we as white Americans cry foul, declaring them “violent” and “angry,” calling them “looters” and “rioters”? Why, by extension, are we arguing that the people who live and breathe in our world have less right to protest, to revolution, to liberty, than a fictional character who will never draw breath, will never have children, will never have life outside of our imaginations? Why does Katniss Everdeen deserve glory, admiration, and even a tint of envy, when real people who do the same things she does, on the streets of America, are devalued, dehumanized, criminalized? Why is Katniss a celebrity, while the protesters in Ferguson are vilified?

After all, Katniss killed soldiers of the capital to achieve her ends. The only person who has died in connection with the Ferguson protests is Michael Brown.

I am thankful that people are unafraid to fight for their rights. But I wish I didn’t have to be.

10 replies to Thanksgiving, Ferguson, and The Hunger Games