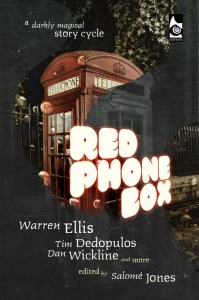 A few months back, I got connected with TLC Book Tours because of my love for Doctor Who. So when my TLC contact asked me if I would be willing to read a fantastical, mysterious, dark story featuring as one of its central aspects a time- and space-traveling red phone box (which is actually much less similar to Dr. Who than it sounds), I was immediately interested.

I received my copy of Red Phone Box and eagerly delved in. It’s a delightful concept; ‘a darkly magical story cycle’ with many writers who provide a wealth of different voices and characters to the overall narrative. Each chapter, short and to the point, follows a different character as their lives interweave through the single unifying strand of the magical phone box. With stories that range from the very fantasy-esque, featuring a carving of an ancient Celtic deer imbued with special protective powers, to the darker, more murder-mystery side complete with bodies floating down the Thames, each chapter comes together to form a cohesive whole, a unified story of a dark and storied phone box with a will of its own.

In theory, anyway. Unfortunately, it didn’t quite work out that way in practice. By two-thirds of the way through the book, I had to put it down. I wasn’t engaged anymore. The strands and filaments of a story in Red Phone Box still hadn’t come together to form any identifiable storyline, and many of the characters’ narratives were a complete mystery to me. There were too many characters and stories to keep straight; every time I opened to a new chapter, I had to flip back through every chapter prior to see where the new protagonist’s name had featured last. I just couldn’t keep track of what was going on. When I finally realized it was taking me more mental effort to read this than it did to read Infinite Jest, I checked out.

I wanted so badly to like this book. In fact, I really did like it, throughout the first third of the story. Mysterious, edgy, and suspenseful, the book hooked me and dragged me into it. It was a good feeling, especially because this isn’t my usual type of read. The writing was lucid, easy, yet descriptive and engaging. There were stylistic differences between the different writers, but they were minimized and flattened enough that I could ignore them. It even made me kind of like vampires (spoiler alert!). The paranormal reality and disturbing use of illusion and black magic had me totally captivated. But after about the halfway mark, I started to get impatient for some sense of just what the hell was going on, and I wasn’t getting that. By 2/3 of the way through when there were still new characters being introduced, I had had enough. Alas. I loved the premise, and I loved the writing style. But the execution was flawed, and I couldn’t continue.

I have a pretty strict reading policy that if I’m no longer looking forward to picking up the book, I’m not going to force myself to finish. Time is limited in this world, and I’d rather move on to something new than struggle through for potentially very little reward. I regret to say that Red Phone Box was just such an instance. Although in this case, it followed the reverse of a normal trajectory: Usually, it takes me a while to get into a book, and then once it’s drawn me in, I’m totally absorbed. In this case I fell out of it slowly, but once I fell, there was no coming back.

I’m sorry, little book. I wanted to fall in love with you. But there was something missing. I still think there are people out there who will love you: people with a little more patience than I. There are, I know, people in the world who love suspenseful novels that don’t reveal any answers until the very last page. I am not one of them. I am sure that Red Phone Box could be a success among people like that; for me, however, it just wasn’t doing the trick.

Two stars. I’m sorry, little book. But you and I just weren’t meant to be.

Many thanks to TLC Book Tours and editor Salome Jones for providing me with a copy of this book. I appreciate, as always, the opportunity to read and learn.